A fixture of Asia’s annual beverage calendar, full results of the 13th Cathay Hong Kong International Wine & Spirit Competition (HK IWSC) were announced today.  Fifty-twotrophies were awarded to global wine, spirit, sake and beer producers – those judged best of their category. Furthermore 107 gold, 496 silver and 372 bronze medals were awarded to top quality beverages, along with 10 green medals to producers who demonstrated both outstanding quality and a commitment to sustainability.

Fifty two judges sipped, debated and deliberated their way through thousands of samples in the last week of September led by Master of Wine Debra Meiburg, to ensure an authentic pan-Asian voice on the very best international wines, sake, spirits and now beer for the Asian market.

Perhaps channelling its recent Olympic success, Japan climbed to top of the chart with five trophies, including the highly coveted Best Worldwide Whisky/Whiskey, back in their clutches after five years abroad.

In the Americas, USA led the competition with two trophies, while Cuba won their first trophy ever in the Rum category.

Scotland, South Africa, Thailand and Georgia are also featured on the trophy board.

While the prestigious Trophy winners are always in the spotlight, Gold medallists deserve significant recognition for gaining top marks from the judges. Amongst the winners, some dark horses emerged victorious, with gins from India and Hong Kong, fruit spirits from Georgia, vodka from Brazil, and wines from Romania all gaining gold.

In a competition first, HK IWSC 2021 also welcomed a guest VIP international wine judge at-large, Cleighton Cornelius, senior winemaker at Mud House, New Zealand. Cleighton is an admired international winemaker, viticulturalist and oenologist who has trained in Europe at Chambolle-Musigny (France), Rheingau (Germany), and Cyprus. Cleighton welcomed the judges each morning and led the calibration tasting with Debra Meiburg MW from his home base in New Zealand.

This year, the wine and spirits judging took place at The Arca, a newly opened hotel in the southside of Hong Kong. While the Asian food pairing awards returned to its annual home at The Royal Garden, renowned in Hong Kong for its diversity and quality of pan-Asian cuisine.

The full results of the Cathay HK IWSC can be found on www.hkiwsc.com. 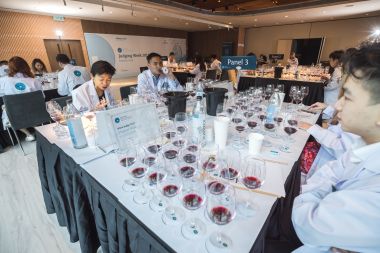